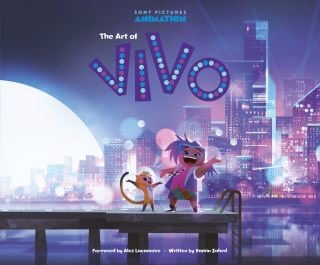 The Art of VIVO

The official behind-the-scenes companion book to VIVO, the first-ever musical from the Academy Award-winning studio Sony Pictures Animation, coming to Netflix this Summer.

The Art of VIVO will give readers a behind-the-scenes look at VIVO, the first-ever musical from Sony Pictures Animation, including exclusive concept art, character designs, storyboards and commentary from the award-winning filmmaking team. VIVO will be released in over 190 countries on Netflix this summer.

VIVO follows a one-of-kind kinkajou (aka a rainforest "honey bear"), who spends his days playing music to the crowds in a lively Havana square with his beloved owner Andrés. Though they may not speak the same language, Vivo and Andrés are the perfect duo through their common love of music. But when tragedy strikes shortly after Andrés receives a letter from the famous Marta Sandoval, inviting her old partner to her farewell concert in Miami with the hope of reconnecting, it's up to Vivo to deliver a message that Andrés never could: A love letter to Marta, written long ago, in the form of a song. Yet in order to get to the distant shores of Miami, Vivo will need to accept the help of Gabi—an energetic tween who bounces to the beat of her own offbeat drum. VIVO is an exhilarating story about gathering your courage, finding family in unlikely friends, and the belief that music can open you to new worlds.

The Art of VIVO offers readers insight into how this design aesthetic for the film was developed and how animators take inspiration from real-world locales to bring songs to animated life. This is an essential addition to any animation fan's library.

Ramin Zahed:
Ramin Zahed is a Los Angeles–based author and editor in chief of Animation Magazine. His recent books include Spider-Man: Into the Spider-Verse: The Art of the Movie, The Art of Captain Underpants, and The Art of DreamWorks Animation. Alex Lacamoire is a multiple Tony and Grammy Award-winning musician, who has worked on shows including In the Heights (2008), Hamilton (2016), and Dear Evan Hansen (2017) and movies such as The Greatest Showman (2017). Lacamoire was a Kennedy Center Honoree in 2018.