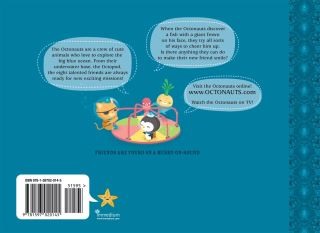 The Octonauts and the Frown Fish

- the series has been optioned for television animation (scheduled for late 2009) - special sales markets: art, gift, children's - the first Octonauts book was named a Publisher's Weekly "indie surprise" in 2006, is in its 2nd printing, and has been licensed into Japanese - Meomi won the design competition for the mascots of the 2010 Vancouver Winter Olympics - Meomi's Peso Penguin t-shirt is sold thru Hot Topic -

Meomi:
Meomi is Vicki Wong and Michael Murphy. Meomi enjoys sitting by the ocean, making up stories, drinking tea, and drawing strange creatures. Meomi's characters have appeared in clothing, toys, merchandise, and magazines worldwide. They have also created art and animation for clients such as CBC4Kids, Google, Monterey Bay Aquarium, Yo Gabba Gabba, and the Vancouver 2010 Olympics and Paralympics. Meomi likes sea slugs, yarn hats, and ukuleles. Visit them at www.meomi.com.