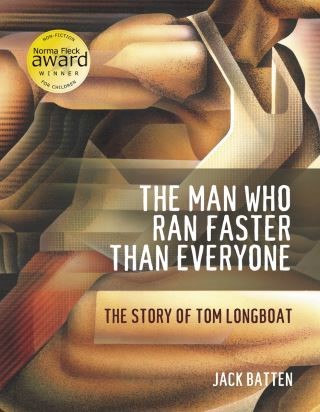 The Man Who Ran Faster Than Everyone

The Story of Tom Longboat

Tom Longboat was a hero. A member of the Onondaga Nation, he was born on the Six Nations reserve in Oshwegen, near Brantford, Ontario. Despite poverty, poor training, and prejudice, Longboat went on to become one of the world’s best runners. In 1907, at the height of his fame, he won the Boston Marathon and ran in the 1908 Olympic Marathon. Longboat was one of the best-known people of his day, and certainly the most prominent member of the Six Nations. Throughout his career he had to race against opponents, as well as rumors of illegal running activities. Nevertheless, he maintained his dignity, and his achievements still inspire people who understand the great pleasure of running, and running fast.

Jack Batten: Jack Batten is a well-known author, journalist, reviewer and radio personality. He has written thirty books on subjects that include biography, crime fiction, law and court cases, and sports.

Jack Batten’s first career was as a lawyer. After four years, he turned with relief, to writing. He has been a staff writer at Maclean’s Magazine and the Star Weekly. Batten has written for many magazines including Chatelaine, Rolling Stone, Toronto Life. He has written radio plays for the CC and a jazz column for The Globe and Mail. Nowadays, Jack Batten writes books and reviews videos for CBC Radio’s Metro Morning and Ontario Morning.

The Man Who Ran Faster than Everyone is Jack’s most recent book, for which he has won the Fleck Award for non-fiction, the biggest prize in Canadian Children’s literature.