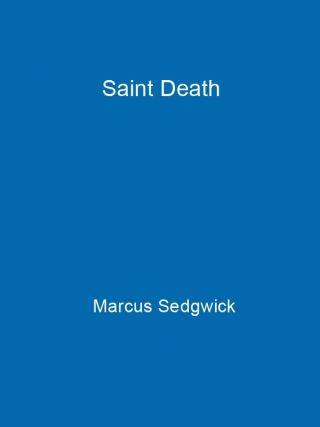 shortlisted for the CILIP Carnegie Media 2018

Anapra is one of the poorest neighbourhoods in the Mexican city of Juarez - twenty metres outside town lies a fence, and beyond it, America - the dangerous goal of many a migrant. Faustino is one such trying to escape from the gang he's been working for. He's dipped into a pile of dollars he was supposed to be hiding and now he's on the run. He and his friend, Arturo, have only 36 hours to replace the missing money, or they're as good as dead.

Watching over them is Saint Death. Saint Death (or Santissima Muerte) - she of pure bone and charcoal-black eye, she of absolute loyalty and neutral morality, holy patron to rich and poor, to prostitute and narco-lord, criminal and police-chief. A folk saint, a rebel angel, a sinister guardian.

Marcus Sedgwick used to work in children's publishing and before that he was a bookseller. He now happily writes full-time. His books have been shortlisted for many awards, including The GUARDIAN CHILDREN'S FICTION AWARD, the BLUE PETER BOOK AWARD, the CARNEGIE MEDAL and the EDGAR ALLAN POE AWARD. Marcus lives in Cambridge and has a teenage daughter, Alice.