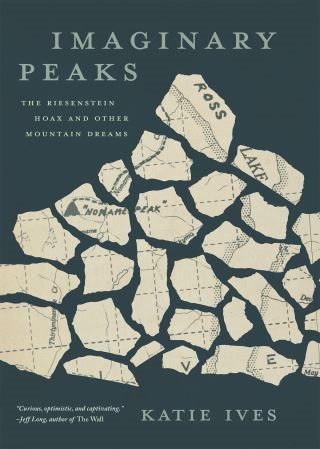 The Riesenstein Hoax and Other Mountain Dreams

Using an infamous deception about a fake mountain range in British Columbia as her jumping-off point, Katie Ives, the well-known editor of Alpinist, explores the lure of blank spaces on the map and the value of the imagination. In Imaginary Peaks she details the cartographical mystery of the Riesenstein Hoax within the larger context of climbing history and the seemingly endless quest for newly discovered peaks and claims of first ascents. Imaginary Peaks is an evocative, thought-provoking tale, immersed in the literature of exploration, study of maps, and basic human desire.

Katie Ives: Katie Ives’s writing has appeared in numerous publications, including The New York Times, Outside, The Rumpus, and Adventure Journal, as well as the anthologies Rock, Paper, Fire: The Best of Mountain and Wilderness Writing and Waymaking: An Anthology of Women’s Adventure Writing, Poetry and Art. In 2016 she received the H. Adams Carter Literary Award from the American Alpine Club. She has participated in the Banff Mountain and Wilderness Writing Program and has served as a judge for the Boardman-Tasker Award, and a jury member, panelist, and panel moderator at the Banff Mountain Book Festival. Ives is editor in chief at Alpinist magazine and lives in Cambridge, Vermont. This is her first book.