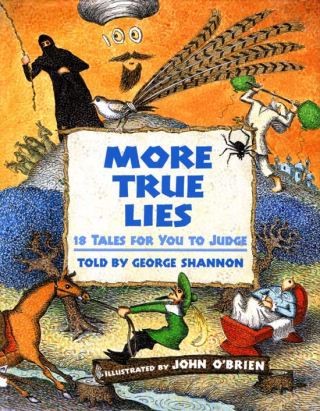 A man is thrown in jail for picking up a rope. A student earns one hundred points on his math and history tests, yet fails both classes. A spider saves a fugitive from a legion of warriors. A farmer buys a cow, a horse, and a donkey, all with a single ear of corn.... Each of the eighteen stories in this book is true, technically. But each is also a lie.

In his second collection of "true lies" from around the world, George Shannon challenges young readers to uncover the whole truth. But be careful: a word with more than one meaning can obscure the facts. And a hidden detail can mean the difference between honesty and a twisted truth that is, in its essence, a lie.

Can you tell the difference?
Can you discover:
"What's the truth,
the whole truth?
And where's the lie?"